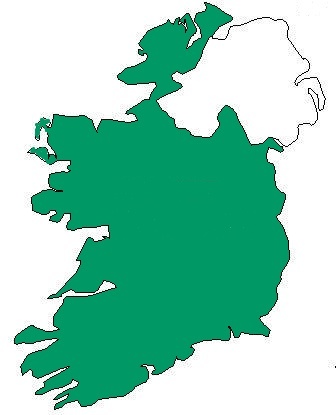 The magnitude and characteristics of the population of cancer survivors: using population-based estimates of cancer prevalence to inform service planning for survivorship care 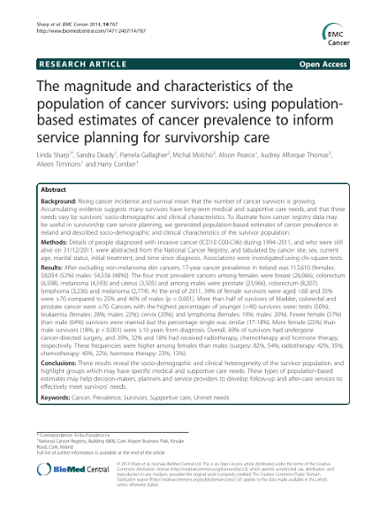 Abstract Background Rising cancer incidence and survival mean that the number of cancer survivors is growing. Accumulating evidence suggests many survivors have long-term medical and supportive care needs, and that these needs vary by survivors’ socio-demographic and clinical characteristics. To illustrate how cancer registry data may be useful in survivorship care service planning, we generated population-based estimates of cancer prevalence in Ireland and described socio-demographic and clinical characteristics of the survivor population. Methods Details of people diagnosed with invasive cancer (ICD10 C00-C96) during 1994–2011, and who were still alive on 31/12/2011, were abstracted from the National Cancer Registry, and tabulated by cancer site, sex, current age, marital status, initial treatment, and time since diagnosis. Associations were investigated using chi-square tests. Results After excluding non-melanoma skin cancers, 17-year cancer prevalence in Ireland was 112,610 (females: 58,054 (52%) males: 54,556 (48%)). The four most prevalent cancers among females were breast (26,066), colorectum (6,598), melanoma (4,593) and uterus (3,505) and among males were prostate (23,966), colorectum (8,207), lymphoma (3,236) and melanoma (2,774). At the end of 2011, 39% of female survivors were aged <60 and 35% were ≥70 compared to 25% and 46% of males (p < 0.001). More than half of survivors of bladder, colorectal and prostate cancer were ≥70. Cancers with the highest percentages of younger (<40) survivors were: testis (50%); leukaemia (females: 28%; males: 22%); cervix (20%); and lymphoma (females: 19%; males: 20%). Fewer female (57%) than male (64%) survivors were married but the percentage single was similar (17-18%). More female (25%) than male survivors (18%; p < 0.001) were ≥10 years from diagnosis. Overall, 69% of survivors had undergone cancer-directed surgery, and 39%, 32% and 18% had received radiotherapy, chemotherapy and hormone therapy, respectively. These frequencies were higher among females than males (surgery: 82%, 54%; radiotherapy: 42%, 35%; chemotherapy: 40%, 22%; hormone therapy: 23%, 13%). Conclusions These results reveal the socio-demographic and clinical heterogeneity of the survivor population, and highlight groups which may have specific medical and supportive care needs. These types of population-based estimates may help decision-makers, planners and service providers to develop follow-up and after-care services to effectively meet survivors’ needs.